As the United Kingdom looks to reshape its manufacturing base in the aftermath of COVID-19, Steve Bagshaw, the former chief executive of Fujifilm Diosynth Biotechnologies, believes the Tees Valley biosciences industry is uniquely able to take advantage of this shift in priorities. Here, he tells North East Times how, in particular, a new partnership with Teesside University could help pave the way for further investment in the region

Like any successful leader, Steve Bagshaw believes that reflection is paramount to developing a future strategy.

It’s a belief that has stood him in good stead throughout his six years at the helm of Fujifilm Diosynth Biotechnologies; a firm he helped build from a small independent company spun out of the ICI estate, to what is now a global contract developer and biopharmaceuticals manufacturer with a turnover exceeding half a billion pounds a year.

Now, more than ever, he feels the UK needs to look back and learn from the lessons of the coronavirus pandemic.

Doing so will allow the Tees Valley, and the North of England as a whole, to shape its future direction.

“Whatever your position is, I think we’d all have loved it if we’d done a better job on producing tests or procuring some of the medical devices that were needed,” he says.

“Look at the mess we’ve found ourselves in and some of the challenges we’ve had to overcome.

“I think the UK has woken up to the fact that its supply chain is not that strong in certain areas. For years we’ve imagined that so long as we can buy it, we’ll be alright. I think now there’s a real understanding of how the supply chain is really, really important.

“The fact of the matter is we’re most likely going to have to import much of what is going to be used to deal with the crisis. In two or three years we must not be in this situation.”

Making sure that this situation is not repeated will not be easy.

However, Steve believes that the Tees Valley possesses a unique combination of factors, which mean it is poised to take full advantage of the COVID-19 recovery.

First among these is the region’s long history of manufacturing.

Apart from the skillsets that the legacy of businesses like ICI have embedded, there is a culture of manufacturing that permeates the region.

Unlike other bioscience clusters, such as the famed Golden Triangle between London, Oxford and Cambridge, the Tees Valley has embraced manufacturing like no other region in the UK.

Leading from this, Steve believes, is a willingness to collaborate and a cross-pollination of ideas and expertise, which has helped engender a unique eco-system of innovation in the life sciences businesses across the region.

It is because of this, that he is particularly excited about his latest role as chief industry advisor for Teesside University’s National Horizons Centre [pictured below], based in Darlington. 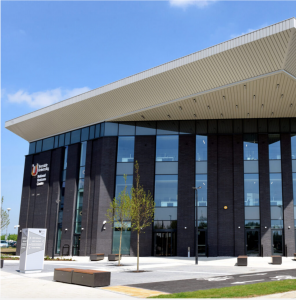 In this position he will provide a vital link to the £22.3 million national centre of excellence, connecting it with and informing it about the needs of the region’s life sciences businesses; helping the National Horizons Centre fulfil its key mission to develop the workforce of the future, while upskilling and training employees in the latest developments in bioscience.

The chief industry advisor role is one of a portfolio of advisory and mentoring positions he has taken since stepping down as chief executive of Fujifilm Diosynth Biotechnologies earlier this year.

These include non-executive directorships of the Centre for Process Innovation and Arcinova, in Northumberland.

He also is chair of the UK Industrial Biotech Leadership Forum and sits on the UK Vaccine Taskforce. He continues to support Fujifilm Diosynth Biotechnologies as non-executive chairman.

Each of these roles will, no doubt, feed into his work at the National Horizons Centre, which he believes is set to be a major catalyst for the levelling-up agenda in the Tees Valley, helping to attract funding for research and development.

“The Government has made a big point about investment in research and development with significant extra resources committed.

“But to attract that investment you’ve got to be willing to put your own neck out, which is something Teesside University has done, in conjunction with the Tees Valley Combined Authority, to get the National Horizons Centre off the ground,” says Steve.

“We were very excited about the potential of the National Horizons Centre at Fujifilm, and I was one of the letter writers who wrote in support of it.

“We could see there was a training need, not just for undergraduate courses, but for applied learning, a mix of continuous professional development and basic skills training.

“The team that Jen [Dr Jen Vanderhouven, the recently-appointed director of the National Horizons Centre] is putting together is of extremely high-quality, with vast amounts of knowledge and knowhow in this industry.

“They really have the potential to partner with firms like Fujifilm and really add value.”

He points to research at the National Horizons Centre using digital technology to capture data at the point of use, which is being utilised by businesses in the biosciences sector to train employees about their equipment and improve their operations.

The research has had such a positive impact that firms outside of the life sciences sector have expressed an interest in incorporating it in their work.

All of this adds up to a real sense of optimism about the future direction of the biosciences industry on the Tees Valley.

Steve points to the fact that the region’s reputation is growing globally.

As well as Fujifilm, companies like Quorn and Calysta, which is based at Wilton, near Redcar, are attracting international attention for their work.

“These are all positive stories of companies setting the bar of where global manufacturing is going,” he says.

“That is now the sort of thing that Teesside can aspire to and attract other companies to be part of that ecosystem.

“However, that won’t work unless we actively make it work to happen. That’s the responsibility we now have.

“I really want the Tees Valley learn from this and not think that someone will bring that to you.

“We need to use all of our skills to make sure that we’re part of the solution to areas where the UK is struggling.”